“Phoolan Devi, for me, is a symbol,” says Lady Kharrazi. “She wasn’t a woman, she’s a legend.” On one hand, she was an outcast in the eyes of society. She was a murderer and a bandit, and she did lots of things that were wrong.

However, that humanity made her endearing. People loved her because of it, and many nearly worshiped her as a religious figure. As a result, Lady Kharrazi is helping to produce an up-and-coming film about the life of Phoolan Devi. 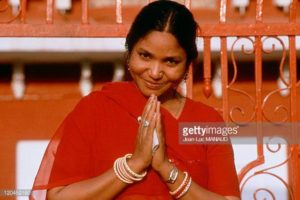 Who Was Phoolan Devi?

Phoolan was born to a poor family in India. Like many women in these unfortunate situations, Phoolan was constantly exposed to violence.  However, despite this turmoil, Phoolan refused to hide in the shadows. Instead, she turned the tables on her abusers.

The Bandit Queen was praised as a folk hero for her rebellion and elected to India’s parliament by popular vote. However, Phoolan’s political career was cut tragically short in 2001 when she was murdered. As the Guardian reported, it took 10 years for her murderer to be brought to justice.

Phoolan Devi’s life was full of violence and crime, but also great public benefit and peace.

In this way, she is a paradox worth trying to understand. After all, Phoolan lived out her story in a day in age with little information or communication. She was a poor girl from a family low in the Indian social classes. The question of what drove her to rebel against those who harmed and oppressed her in those circumstances is worth knowing.

In many ways, the rebelliousness makes her a role model.

She is a role model for oppressed people everywhere, who look at her and know that it’s possible to fight back. She is especially a role model for women. All too often, girls and women are exposed to violence, oppression, and unthinkable abuse.

Phoolan shows these women that standing up against your abusers is possible. Further, the fact that Phoolan was ultimately accepted back into society can give hope to women living in highly traditional cultures. Like Phoolan, they may be able to rise up against their oppressions and change their societies for the better.

Ending Violence and Oppression Through Advocacy and Awareness

Lady Kharrazi is promoting Phoolan’s story for many reasons. “Yes, you can change your caste. Yes, you can stand up against abuse, against the pain and injustice of today… [Phoolan] spoke of many things that didn’t even come into people’s minds in those days.” In this way, Phoolan is an important role model for people around the world.

For her own part, Shusma Datt of of Women in Focus called Lady Kharrazi’s work on the Phoolan Devi film “commendable.” She observed that Lady Kharrazi has no personal connection to the filmmakers, but she is helping to bring Phoolan’s story to life regardless.

“Yes, but I am a woman,” Lady Kharrazi says with a smile.

“I understand her, I feel her, I feel her pain through my bones… For more than half of my life, I’ve seen the crime, the injustice, the abuse, all of the time and nobody did anything about it.”

As a result, she sees the film as an important story of advocacy and awareness. By sharing Phoolan’s story with the world, Lady Kharrazi seeks to open peoples’ minds to the type of violence all too common today. In doing so, she hopes to empower oppressed people – women and girls, especially – everywhere.