The law, titled “Prohibition for the Covering of the Face” bans surgical masks, party masks and ski masks in public places. If violated, a fine of 150 euros is issued with police given the ok to use force if there is resistance. This law, however, mirrors the group who this will affect the most: Muslim women.

Though there is only an estimated 150 women who wear a full burqa in Austria, it is still wrong. The law forbids the covering from hairline to chin.

Carla Amina Bhagajati of the Islamic Religious Community in Austria told Telegraph, “the ‘handful’ of fully veiled women she knows of in Vienna ‘now are criminalized’ and ‘restricted to their homes. ‘This open society is, in a hypocritical way, endangering its own values,’ she added.”

This far right movement and anti-migration ideals are supported highly. Parties who are campaigning for the October 15 election with anti-immigration messages are expected to win this year. This would come as a shock after years of a center-left government that believed in equal power. However, this reflects the current belief of Austrian people.

"It's not right that those living here don't show their faces," said Emma Schwaiger, who expressed support for the ban in a straw poll on the streets of Vienna according to LA Times.

According to The Washington Post, five out of seven supporters of the ban said they would vote for two of the anti-Muslim parties. The parties are, “the traditionally xenophobic Freedom Party and the People’s Party.” Under new leader Sebastian Kurz, The People’s Party has moved from a center stance to more right winged ideals.

After the People’s Party helped 100,000 migrants into their country in 2015, the party now criticizes that move. According to PBS, the party now says, “the political establishment failed in dealing with the refugee crisis.”

Kurz now calls for zero illegal immigration. He suggested migrants stopped on the high sea should be sent to refugee camps in North Africa instead of Europe.  Kurz has also reaffirmed the people that the face-cover ban will be heavily enforced. This way of thinking is said to be, “protecting Austrian values,” according to Vogue.

Austria is a hotpot for Muslims to visit on holiday according to The Washington Post. This anti-Muslim ideal regresses the years of change and acceptance in this mostly-catholic region. 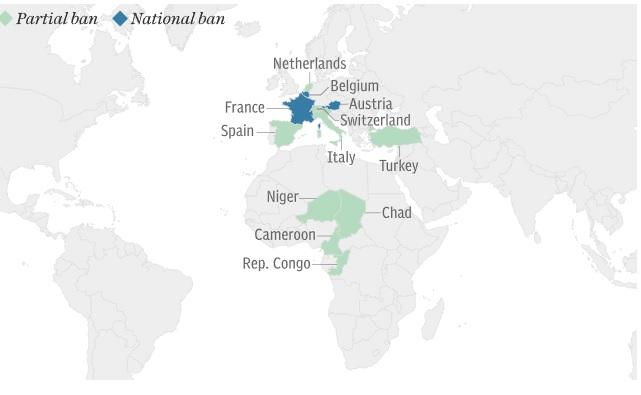 Kurz told German television, according to The Daily Mail, “'the immigration seen in recent years is changing our country not in a positive but in a negative way.”

Activists and experts are denouncing the law by calling it Islamophobic and counterproductive.

Carla Amina Baghajati, an activists and spokesperson for the Austrian Islamic Religious Authority, told Aljazeera, "They believe that they are 'freeing these women' and that they're taking action to secure the identity of Austria, but this is hypocritical as the idea of an open society is that everybody has the liberty to act and dress as they please as long as nobody else is harmed. These ladies are being criminalized. Everybody thinks that they are victims, but you cannot be patronizing them. They say that they do not want to be freed because they are already free and chose to wear the face veil.”

This fear of the unknown has leaked into the mainstream politics which fuels that hate against Muslims. To take away someone’s right to choose what to wear is a regression on what democracy and freedom means.

“The unknown should never be tackled with hate,” said Jamileh Kharrazi. “Just because someone chooses to cover up does not mean they are a terrorist or trying to change your freedom. This backwards thinking will only lead to more hate and unrest.”

Thousands marched in the streets of Vienna to protest this ban.  “Every woman must be able to move freely in public without harassment and discrimination – no matter what she does or does not wear," a Muslim youth group wrote on their Facebook according to Independent. The protestors are accusing the government of perpetrating hate and sexism.