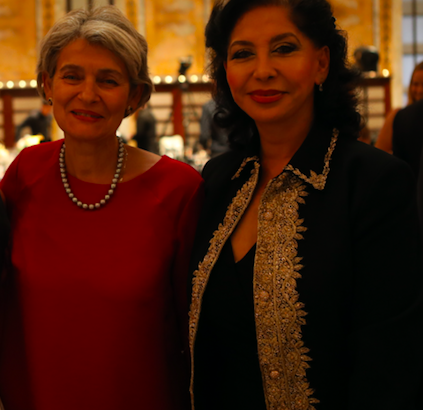 "In response to violent extremism in cities worldwide, it's not only the armed forces that ultimately will bring a better, safer future,” said Bokova to PR Newswire. “This is a battle to win the hearts and minds of those at risk of violent extremism influence. With the newly formed Global Hope Coalition, we're coming together as a global community to help fight violent extremism and intolerance, protect cultural heritage, and encourage intercultural dialogue."

While women have existed throughout history alongside men, it has not always been acknowledged. Mme.Bokova awarding these women is a great step toward closing the gender gap.

Born in 1990 in Dohuk, Iraq, Saleh joined the Peshmerga forces where she graduated the Military Academy.  She climbed the ranks until she was a commander of an all-women soldier unit. Through multiple missions, her and her team saved Yazidi and Christian villages from ISIS groups. Saleh witnessed the atrocities that the ISIS soldiers had done to people. Along with the unit, Lieutenant Kochar has worked with U.S. Coalition forces in Northern Iraq. She has now been a member of Peshmerga for eight years.

Her courage to stand up to bigotry, has helped Christian and Yazidi communities.  Her role in liberating Mosul, truly makes her a Hero!

Rudaw writes: “Our fight against the terrorists of ISIS was not only to protect the people in Kurdistan Region, but also to defend humanity and religious freedom,’ said Saleh during her acceptance speech.  ‘A large number of fighters in the Kurdistan Peshmerga force sacrificed their lives to protect ethnic and religious minorities from the brutality of ISIS. The genocide committed against Yazidis, Christians, and others will never be forgotten. As we speak there are around 3,000 Yezidi women and girls still in ISIS captivity" she told the UNESCO Global Hope Coalition Summit on the sidelines of the UN General Assembly in New York.

Ziaten moved from her country Morocco to France to be a bride at the age of 18.  She raised five kids and hope to give them the life she could not have growing up. In 2012, her life came crashing down after an Islamist terrorist killed her son. From pain, she created the Imad Association for Youth and Peace, named after her son. Ziaten has been vocal in relations to the recent terrorist attacks in France.

Her role in bringing awareness and tolerance towards extremist attacks has made her a true hero.  Her pain became a voice for social change.

BBC News “’Ever since I heard them tell me, Madame, Mohamed Mehra is a martyr, he is a hero of Islam, I have not been able to stop doing what I am doing. I thought, God, no. We have to help these lost young people. So I promised my son, Imad, I am  going to start an association and I am going to save others so they will not suffer like me” said Latifa.

Almellehan has been an activist for education and Syrian refugees since 2013. At that time, she was forced to leave Syria with her family.  She began campaigning for girls in schools in Jordan, where she lived in a refugee camp for three years. Almellehan recently attended the G20 in Germany and spoke at the Global Citizen Concert. She met with leaders to ask for their help in equal education for every child, no matter who they are.

Her willingness to voice the injustices young girls face living in the Middle East has made her an everyday hero. “There were many girls who were forced into marriage, it was so devastating, Almellehan told Reuters recalling her time at the camp. I wanted other girls to feel the hope that I felt so I went from tent to tent trying to prevent the marriages and bring more girls in schools. Fleeing war and seeing your country being destroyed is one of the hardest things that children can face."